Uncharted Waters with Peter Miller takes a dive into the local flair of some of the world’s best angling destinations. Peter takes you on a journey, filled with candid conversation and laughs, with both residents and tourists alike. 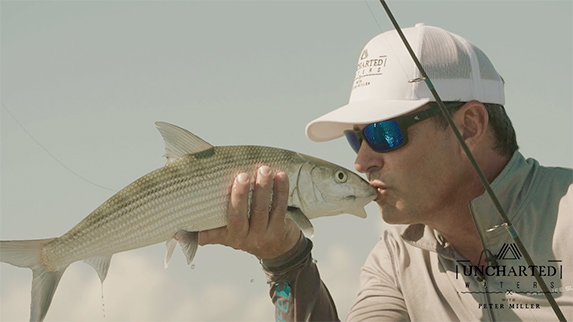 Peter Miller is most well known for his nationally televised show called Bass2Billfish on NBC Sports. He is the Host, Producer and Creator of this Emmy Nominated TV show, which has garnered 7 Telly Awards along the way. Bass2Billfish features travel, fishing, food and activities.

For 25 years, Peter has been in front of the camera, gaining extensive knowledge of the TV industry. Having produced music videos for Pit Bull, TV commercials for Monster Audio and working alongside celebrities such as LeBron James, Christian Slater, Ice Cube, Patrick Dempsey, Kevin Hart and Arnold Schwarzenegger.

Peter is also a 3 Time World Sailfish Champion and has won or placed in over 120 high profile billfish tournaments throughout the world. Peter works closely with the Make-A-Wish foundation (having granted 6 wishes thus far), the Everglades Foundation, Captains for Clean Water, the International Game Fish Association and the Florida Fish and Wildlife Conservation Commission. He also works with Wounded Vets and the National Down Syndrome Society.